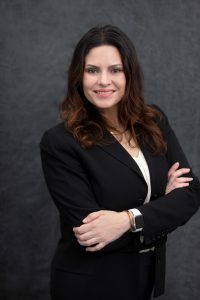 Mary C. Peláez, Esq. was admitted to the New York State Bar in 2005. She earned her Juris Doctorate from Albany Law School with a concentration in Family and Elder Law. Ms. Peláez attended Stony Brook University and St. John’s University, where she received her B.A. in Sociology. She also holds a Certificate in International Human Rights from Tulane University. Ms. Peláez was a Suffolk County Assistant District Attorney before joining the practice in 2006 as an associate. During her time in the District Attorney’s office, Ms. Peláez worked in the Domestic Violence Unit and prosecuted misdemeanors and felonies in the Case Advisory Bureau. She gained a reputation as a tough but fair prosecutor. She became a partner in 2008.

Ms. Peláez concentrates her private practice on Family Court and matrimonial matters. She has also been recognized for her experience and competence by local Family Court judges, having been appointed to serve as a law guardian and on the assigned counsel panel. She is also experienced in handling criminal and traffic matters.

Her experience also includes the following:

4.6
See all reviewsWrite a review

Wero enoc Alvarenga
21:34 10 Nov 22
My speeding ticket reduced to a parking ticket thank you Mr. Bennett and Joanna for being such a helpful secretary

Adriana Restrepo
16:58 09 Nov 22
Chenango town cout speeding ticket reduced to a parking ticket súper happy had to take a class staff helped me sign up for and no record at all.

Edwin Hernandez
13:25 03 Nov 22
Super happy I can not thank the firm enough. Got a DWAI after Mr. Bennett fought hard for me to prove to the judge I was just driving after having had taken my medication my charges were reduced to a parking ticket with a fine of $100. I will forever be thankful to this lawyer and recommend them 100%

Wilber González
14:39 02 Nov 22
Got my speeding ticket in the Bronx dismissed super amazed and happy the wait was worth it ! Recommend 100%

Alexandra Antunez
15:51 29 Oct 22
Amazing attorneys on my case got my speeding ticket reduce to a parking ticket super happy will definitely come back if I have to and will recommend to all my family and friends.

No Mercy Dominicano024
14:51 25 Oct 22
Super happy with the results of my case. Ticket reduced to parking ticket with fine no record super happy and recommend

Janelene Molina
18:42 18 Aug 22
Fantastic law firm with the best lawyers and staff. Helped me lower the cost of a speeding violation. Highly recommended!

Gio San
14:10 19 Jul 22
Got a stop sign ticket and brought it here they took care of everything with no hassle daslin helped me out with almost everything and keeping me up to date she was super helpful I’d recommend this place to my friends and family

Andres Coronel
19:07 31 May 22
Great attorney handeled a case in patchogue village for me reduced to parking ticket did not have to go to court . EXECELLENT SERVICES! Super convenient 🙂

Angel Garcia
19:58 28 Mar 22
Handled a case in oyster bay for me stop sign reduced to a parking ticket with a small fine really happy with the results. Recommended!

Carlos Reyes
02:39 14 Mar 22
If I could give these people 10 stars I would! Best in the business, great at the work they do especially the front girls! The one who helped me the most was Merlyn she did a phenomenal job! And great job lawyers keep on going!

Allan Barahona
03:30 08 Mar 22
Very professional and helpful attorneys from the minute you go into the consult to the minute they resolve your case. They guide you every step of the way very helpful staff Joanna was very helpful in helping me pay my fines. Thank you!

aamir iqbal
17:38 03 Mar 22
Mr McGuire, handled my speeding ticket in 2021 reduced to a parking ticket. I have now received a cellphone ticket and have returned to use him because of the amazing work he does by me always. Amazing services!

Bob Batuyios
00:21 03 Mar 22
Mr. McGuire law firm is one of the best firms in Long Island for landlord and tenant disputes. The staff was very courteous and professional.

Ingri Guerrero
21:53 25 Feb 22
The best attorneys in town! Mr. Belcastro got my tickets in Nassau reduced ! The girls upfront are so polite and professional. Will recommend to anyone in need of an attorney.

J Hernandez
15:03 18 Feb 22
Mr Bennett is amazing ! Got my stop sign ticket reduced to a no point parking ticket. Super happy with the results. Hope I never get a ticket again but if I do I won’t hesitate to call this office !

Natty Lopez
03:40 17 Feb 22
Mr. Bennett got my charges dropped to parking tickets and minimal fines. I was so scared and hiring this lawyer really helped me didn’t have to worry about anything. Super happy the staff is very helpful in always answering any questions or concerns.

Madelyn
03:31 17 Feb 22
Excellent experience working with this office on a speeding ticket I got a couple of months ago. Assistants are professional, efficient, polite and kind. They showed genuine interest in helping me when I would call to inquire about my case. I recommended this office to all of my friends and family !

Jenny Garcia
03:20 17 Feb 22
Mr.McGuire is my family attorney has helped me and my family in multiple matters. Including criminal charges dropped down to violations for my brother and my father. We have been using Mr.McGuire for 7 years and since then everytime we have any issue we call him for help. Always recommend to anyone in need of an attorney!

juan lopez
14:50 26 Oct 21
Great people they help me the same day, i got a problem with identity theft case and they worked with me with no problem, but before that I went to another firm and without reading my case they ask me for 15,000 dollars and 5000 dollars downpayment for me that was incredible so I went to McGuire and they resolved my problem same day for 500.00 dollars then I understand not every law firm is willing to help you, for all you people instead of going some other lawyers that they only want your money with no results, i will recommend to come here and get the job done

rosali salvador
19:29 13 Aug 21
So happy with the services. hired Mr. Mcguire for a Town Violation Dispute and was able to resolve the issue fast and to my favor!

Suleyma Hernandez
23:52 02 Jul 21
Great attorney he represented me on an eviction matter and did a 👏🏼 great job his staff is amazing very responsive and professional.

lelis hernandez
17:57 02 Jul 21
For many months I was very stressed because my tenant was not paying rent or wanted to leave. He was working and refused to pay me. I didnt know what to do and I met up with Mcguire. He was very professional and we started the process. He helped me get my peace back. The girls upfront were always so Nice and professional. They understood my frustration and were always very patience and polite. Joanna and Karen kept me updated and were very helpful. Very humane treatment and not another client.

Jonny Salvador
16:38 24 Jun 21
I found myself in some trouble and called Mr.Mcguire . I got represent by Mr.Bennet and Mrs.Pelaez and was very happy with the outcome on my case. Every step of the way Mr. Bennett always made sure I knew what was going on and helped me feel at ease and not worry about anything. Always recommend to my friends and if I ever find myself in trouble again won’t hesitate to call them again.

Kanisha Allen
18:29 22 Jun 21
They are very professional of handling my case and I’m glad that I called them.

Jonathan Argueta
01:55 22 Jun 21
This business is the best of the best. I am amazed on how the girls that work there are so good at their job. Especially the girl that attended me her name was Merlyn she attended me with such a positive attitude and was very professional. I am glad that chose to come to this place.

Random Nigga On Youtube
00:57 22 Jun 21
the girls are wonderful and so is chris. he was very kind to my family and knew how to handle my speeding tickets. this is the second time they have given me the outcome i’ve wanted. their office is also very clean and beautiful. this firm is great for your legal situations

Anthony A
23:19 21 Jun 21
100% recommend. Everyone was so helpful and I was always informed about the details of my case. The communication was amazing. Chris explained everything really good and gave me a great outcome. The girls there were also very understanding and friendly over the phone.

Jordan Grant
14:04 14 Jun 21
This is a top flight Law Firm which handles all services. I’ve used there services multiple times throughout the years and have always gotten the results I’ve wanted. Everything is laid out for you and throughly explained and they handle it in court within a few days, followed with follow up emails and calls to make sure your completely satisfied. I have referred multiple people here and I’ll continually refer friends and family here.

Shelby Gillman
03:46 27 May 21
Mr. McGuire and Mrs. Pelaez were absolutely incredible along with their staff. I highly recommend!

Maddie Loza
17:34 11 Dec 20
I needed help with a speeding ticket upstate and they were able to assist me and guide me to reduce my points. Their staff was amazing! Very helpful and respectful, any questions I had they always answered with a good tone and very informative. Thank you guys so much!

Julius E
03:28 04 Aug 20
Have used them many times, have never failed to deliver as promised, and even aid in the little things.

Accountant
20:43 24 Jul 20
My multiple experiences with these attorneys and their staff have all been 5 star! They are professional ,responsive, knowledgeable, polite and get me and my family results! I recommend them highly, especially Daslin Castillo. She is on top of everything and goes out of her way to provide the best service!

© Copyright 2022 by McGuire, Peláez & Bennett PC. All rights reserved. Disclaimer.
This site is designed and developed by PR4Lawyers.